Brevardian of the Week – Skip Hirsh! Skip Hirsh is the Advertising Manager at the Transylvania Times and this week’s Brevardian of the Week. Not only is Skip actively involved in the community (he is the immediate Past President of the Brevard Music Center Association of Volunteers, serves on the Board of Directors for VISION Transylvania, is Public Relations Chairman for the Pisgah Forest Rotary Club, and is Team Leader of Transylvania County Relay for Life), but he’s just an all-around fun guy. Tune in to 1240 WSQL today at 1pm where Skip will be on-air with Ann and Lisa on the “I Love Brevard” show!

What is something people would be surprised to learn about you?
My background is in computers; I was a dyed in the wool computer geek through school and into my early career. I was a contractor and consultant for the Federal Government for almost 30 years and my last contracts in Washington we running International Cyber Security War Games to help prepare government and industry organizations to respond to and recover from cyber terror attacks. Not much call for that skill set here… but that’s part of why we came.

What’s one item on your bucket list?
I want to get my pilots license. Ever since I was a little kid I have wanted to fly… there’s lots of stories my parents can tell you about that… What are your hobbies?
I used to be an avid sailboat racer. But there isn’t much call for that skill her either. We like to hike a little and love walking the dogs in the woods, but volunteering takes up a lot of our free time.

Ever had a brush with a celebrity?
I once had drinks with Linda Hamilton; I rode an elevator with Clint Eastwood; and I served House speaker Tip O’Neil a glass of wine at a reunion. 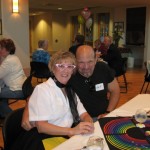 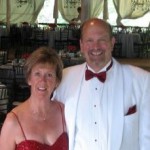 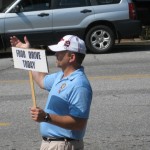 What’s your favorite thing about living in Brevard?
I love so many things about Brevard: the people, the mountains; the arts… I’m not sure I can pin it down, but I can tell you what finally made up my mind that this is where I would like to settle down. We had been looking in the area for a long time while we visited a friend here in the area. One day in the summer I drove downtown just to explore… and I saw a sign for 1240 AM in the window. So there I was cruising down Main Street with my windows down, listening to AM low fidelity hits from my teen years, waving at people who are waving back and looking up at the mountains all around… I was home!

Your biggest pet peeve:
People whose only passion seems to be against things… to say why things can’t be done, rather than spending their energy and passion on what can be done and then digging in and helping to do it.

Who had the most influence (or had the biggest impact) on you while growing up?
Probably my Dad… but James Bond and Sherlock Holmes were close behind. Seriously my Dad was my role model, and my Mom was my inspiration.

What’s the naughtiest thing you ever did as a child?
I’m not sure the statute of limitations has run out on some of those things, so I plead the 5th.

How are you coming on your 2014 New Year’s resolutions?
I resolved not to make any resolutions…. So far I’m doing pretty good on that one.

Did you ever break anything as a child and not tell anyone?
I was a curious, energetic boy… I broke everything and tried not to tell anyone… Unfortunately I’m a lousy liar.

What’s one piece of advice you wish you had listened to when you were younger?
I wasn’t much of a student in my teens. I did alright in high school but never really had the self-discipline to make the A’s. In college, I was even worse…. never really could understand what a degree was going to mean to me. People told me that I needed to buckle down and do it now, because it was never going to be easier than right then. Years later when I was working full time and taking classes at night and on weekends to go back and finish my degree… I wish I had listened.

My self-admitted most annoying habit: (according to family and friends):
Procrastination – never put off until tomorrow those things that you can put off indefinitely

Favorite movie of all time:
It’d have to be one of the Mel Brooks movies – Blazing Saddles or Young Frankenstein or the original Producers movie with Gene Wilder and Zero Mostell.

Favorite music: Jazz, Blues, and 70’s rock, and just about anything played by the students at the Brevard Music Center.

Favorite TV show: Ever? Probably the Rocky and Bullwinkle Show, the original Star Trek, and Saturday Night Live during time the first cast was on the air.

Tell me about the Assault on the Carolinas race. How are you involved? How are the preparations coming along?
While the AOTC is a top flight cycling event, a huge tourism draw, and an economic development driver for the area, it is first and foremost a charity fundraiser. The Pisgah Forest Rotary Club started the AOTC 15 years ago to help fund its charitable giving and to support its many service projects in the area. Last year we netted nearly $50,000 that will be used this year to provide grants, scholarships, and contributions that focus on our clubs’ three primary strategic priorities: youth, education, and health. To name just a few of the charities we supported last year:

This year our registration ran a little bit over, so our total registered ridership is 1101. In addition, our sponsors are entitled additional riders based on their sponsorship level so we expect an additional 70 or 80 riders. So, the total ought to be just shy of 1200. The ride sold out this year in mid-January.

Here is some statistical data about this years riders

The ride starts at 9:00 am and seeing them start from downtown Brevard is a spectacle that shouldn’t be missed. Bring down the whole family and cheer for the riders as they leave. Also if you have the time to go out along the route and cheer for them as they climb the mountains, that kind of moral support is greatly appreciated. Most of all, please be patient and especially careful with the riders on the road. They are not going to be out there more than a few hours and they are helping us raise 10’s of thousands of dollars for local charities.

This site uses Akismet to reduce spam. Learn how your comment data is processed.